I do not believe in luck. There is no such thing. Things happen and we must accept them or reject them. What we do defines us.

This post is continued from Part 1: The Sound of Music. 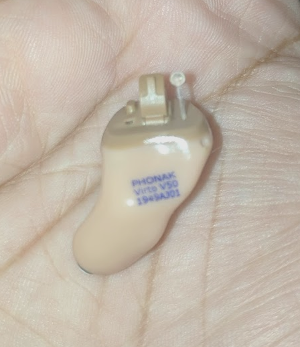 I knew my left ear would not work again. I had it for 32 and a quarter years. I used it well. I have to make do for the rest of my life with one ear.

I have cousins and aunts tell me to stop speaking this way. That I’m being a fool.

I am not. I’m stating the truth. My left ear is dead.

One month after the hearing loss I was scheduled to speak at PyCon India. It was something I had wanted to do for over a year. I wondered if I had to cancel now that I couldn’t hear from one ear, and I could barely walk because my balance was affected.

I didn’t let that get to me, and I did deliver my talk there. I did what I wanted to. And then I had to focus on my health.

I needed to recuperate.

We got a dog soon after. She’s a tiny thing that is growing fast. I used to be scared of dogs, but my closest friend made me fall in love with her dog, a rather handsome old fellow named Puttu. Of the 7 puppies we saw on the road that eventful day, we picked a puppy that looked just like the late Puttu. I miss that old dog so much, despite him being a friend’s and not mine. Somehow, I wonder if he came back to me as my beloved Subbi.

Then, I began going to Yoga classes. The man teaching me yoga used to sell me books when I was a kid. I’d come full circle.

But I was still broken. I was still… damaged. I could still not hear too well in a meeting room.

I have supportive friends. But asking them to repeat themselves is not always an option. Some now veer to my right, knowing that I cannot hear them. Some forget and I pretend I hear what they’re saying.

If I had to name the hardest thing about losing an ear, it would be the fact that I was a predominantly auditory person before. I learned by listening. I loved eavesdropping to get ideas for writing. I have peered through glasses my entire life. That feels natural. Not being able to hear in an ear feels insane.

Turning the wrong side when called, looking at the wrong direction when there’s a sudden sound. These are hard.

I am a developer. You would think that this does not affect my job. It does.

In a meeting room, I have to focus on the conversation. I cannot zone out for even a moment because I won’t be able to connect the dots later. This is hard when I’m sometimes only in a meeting as a consultant and not as a primary audience member. That happens often.

And this makes me think a lot about inclusion. Do we account for inclusion in our lives, or in the things we build.

I build both interfaces and scripts used by engineers, and I have always wondered about building tools which are fun to use. But lately, I have been wondering about the usability of the tools I build.

If I were blind, would text to speech software be able to navigate my user interface? If I were color blind, would my webpage be usable still? Could I hear all the words in a Youtube Video? Does every media file in our tools and websites have subtitles? Are those subtitles available in all major languages? Are the translations making sense?

Somewhere, there is an old man who cannot read the text on your website’s mobile version, or someone who cannot hear the sound of your conference talk video.

I was blind to that until now. And I realize how little inclusion means to us.

Three months after I lost my hearing, after being told that hearing aids might not help me, I tried them on. As the technician configured my first pair of trial hearing aids, I couldn’t differentiate between the calibration sounds and my tinnitus.

And then I heard.

I could hear. It was not natural. It was not even close. At times I cannot tell that the sound comes from my left ear, it still feels like I hear these sounds from my right ear.

I felt as though I have only one earphone and somehow I’ve lost the other one. The presence of a single hearing aid in my ear is jarring. I know it is there. I feel it.

I came home and spoke to my parents. I wanted to hear their voices in my left ear again.

I called my sister. I never call people. I dislike phone calls. She was surprised I called and only understood once I told her I wanted to hear her voice.

I called my aunts, who love me dearly. They were so happy that I could hear their voices.

And I called my best friend. I wanted to hear her voice. She too knew that I never call otherwise.

Do you know what the Superman theme sounds like? I grew up listening to it. That theme means so much to me.

The hearing aid has been a blessing but it isn’t as big a blessing as my friends and the colleagues who understand.

My closestbest friend instantly redirects herself to my good ear when she speaks to me. The first time she did that, I realized that I didn’t need to tell her and I was so happy inside. That meant the world to me.

My colleagues have started walking up to my right so they don’t blindside me. This is after I’ve asked them a lot but it is a big favour in this cruel competitive world.

It shows many things. If you have a friend who cannot afford to eat out as many times as you do, do you offer to pay all those times? How would he feel?

If you have a friend who cannot speak very fluently in English, how do you treat her? Do you choose to use simpler words so she can understand? Is that condescending?

In time, I asked my nephew to bring me a set of Bone Conduction headphones from Canada. These were a blessing. I could hear music at least a little better now. I could feel the percussions as Michael Jackson’s Smooth Criminal played. I could listen to the tones in my favourite Metallica song with tears in my eye once again.

It is a release. More so when I realize that I have not been myself for 6 months.

I got my own hearing aids, they’re barely visible. They are helpful in the workplace. I also bought another pair of Bone Conduction headphones as backup.

However, that does not stop me. It does not have to.

I picked up a “no leaf clover”. What I choose to do with it is how I define who I am.

The hearing aid does not help me hear everything. It gives me a sense of sounds to my left. It’s very, very low, because of how much nerve damage there has been to my ear. That has not dismayed me, and WFH is a blessing.

Read the :ref:`1 Year update <sshl-3>`_ of my experience to understand more.