Reading the Mahabharata by the Tungabhadra - Day 15

Reading the Mahabharata by the Tungabhadra - Day 15¶

My skin feels good against cold stone. I love the feeling in my toes as the cold air and the heat of the sun combine to give me shivers. 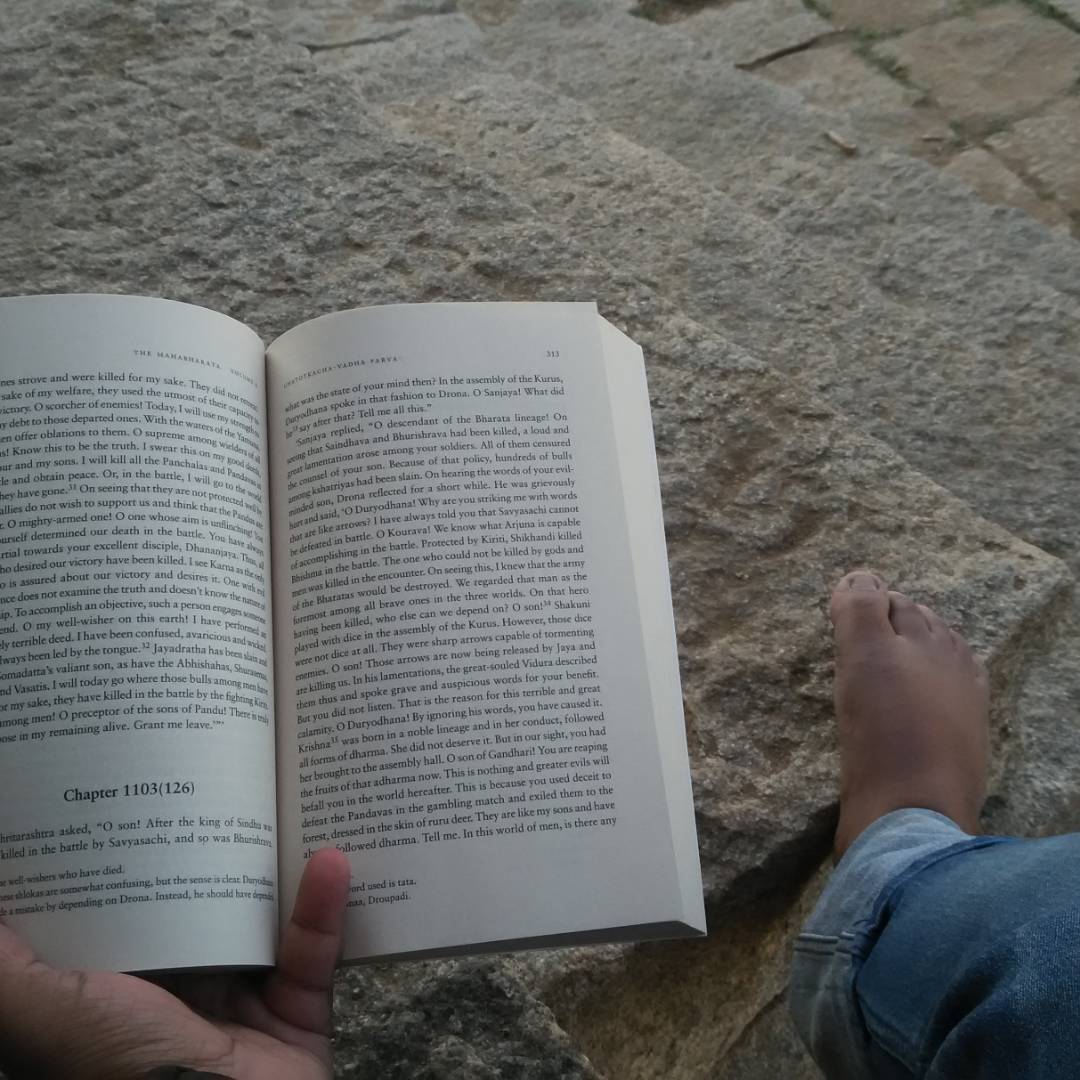 In the three weeks that I have been in Hampi, I haven’t just read the Mahabharata. I have also been looking closely at the ruins. The people selling coconuts by the ruins recognize me, they have discovered that I’m a kannadiga, and they speak to me boldly now, asking me about my life and job. They wonder what I’m doing here, no one comes to the ruins 21 days in a row.

In these days, I have explored places in Hampi I have never seen before. I sat in front of the broken shiva lingam in the Varaha temple, and I explained to two Germans that this temple used to be a pivotal point in the ruins, during Krishnadevaraya’s reign. I have looked down at Achyutadevaraya’s Temple, and I saw how large it is compared to the Virupaksha complex. I stood in front of the Monolithic Bull, and I watched travellers ring its bell.

I have not yet gone to the main places of Hampi during this trip, I have saved them for the last book. I want to read the part I am looking forward to the most there.

Dharma. All the Mahabharata is about Dharma and one’s interpretation of it. Was Abhimanyu wronged when he was cut down by hundreds of Kaurava warriors? Or was Arjuna in the wrong when he shot Bhurishrava in the arm as he was dragging Yuyudhana away?

Even as Jayadratha fell, even as Karna vows to use his pashupati weapon to kill Arjuna, and even as Drona struggles to prove his worth in battle against his students, it is all about Dharma.

Today I went to read the Mahabharata by the Tungabhadra, and I did. As I read, I wondered why in the midst of all this chaos, in the midst of all the interpretations of Dharma, not once does the name Ganesha appear in this entire epic. As I read, a gang of 40 langoors huddled around me, they demanded the shade of the tree I called my home. I was wrong. This is the land of the monkeys.

Other Posts in the Series¶